A local café owner in Toronto who was struggling amid the COVID-19 pandemic is now appealing to the kindness of strangers for funds to stay afloat while he recovers after being assaulted.

Phillip Chan is the owner of Crimson Teas, a beloved café located in Chinatown, near the University of Toronto.

In an interview with Global News, Chan said during the pandemic he racked up $80,000 in debt to keep his tea shop running.

Chan said he was planning to reopen Crimson Teas — which had been closed due to the Omicron variant — in mid-April.

However, Chan said that didn’t happen.

Toronto police told Global News that officers received a report of an assault at Crimson Teas just after 5:15 p.m. on April 12.

Police said three men knocked on the back door of the shop and confronted Chan “regarding damage to a vehicle.”

The men then fled the area on foot, police said.

Chan said he answered the door because he thought it was a student, adding that he is “quite friendly” with many young people in the area, due to his shop’s proximity to the university.

Chan said the men accused him of smashing the windshield on their vehicle which they told him had been parked behind his shop.

However, Chan said he now thinks that was just a “distraction” to get him outside.

Chan said it “happened so quickly,” adding that it is difficult for him to remember some details of what happened during the attack.

What he does remember, though, is being punched in the face, sending his glasses flying.

Phillip Chan said he was lured outside behind the restaurant where he saw two more men. The men accused him of vandalizing a car windshield parked behind his cafe a week earlier, before one man beat him up. pic.twitter.com/ZW9lJ6G3JI

He said he thinks the attack was “very well planned.”

Chan said after watching the assault on video footage provided by a neighbour, he believes the men targeted his head, punching and kicking him repeatedly.

He said the assault left him with a compression fracture in his lumbar spine.

Chan said he has trouble remembering things due to the injuries to his head.

He said the injuries have made it “very difficult to reopen” Crimson Teas.

Police said this is an “active and ongoing investigation.”

Officers said it is “not being treated as a suspected hate crime at this time.”

Chan said he opened the shop having no background in the food or beverage industry.

Police seeking to identify 3 suspects after robbery at Vaughan pharmacy

He said he wanted to use the shop to promote teas and health eating, calling it a “labour of love.”

“I invested a lot into this business, and this is the one thing I chose to do instead of working comfortably,” he said.

“So if I’m not able to sustain this, that means all these efforts that I invested in here is going to be down the drain.”

Chan has put signs up around his shop, saying those who attacked him “must stop harming more people.” 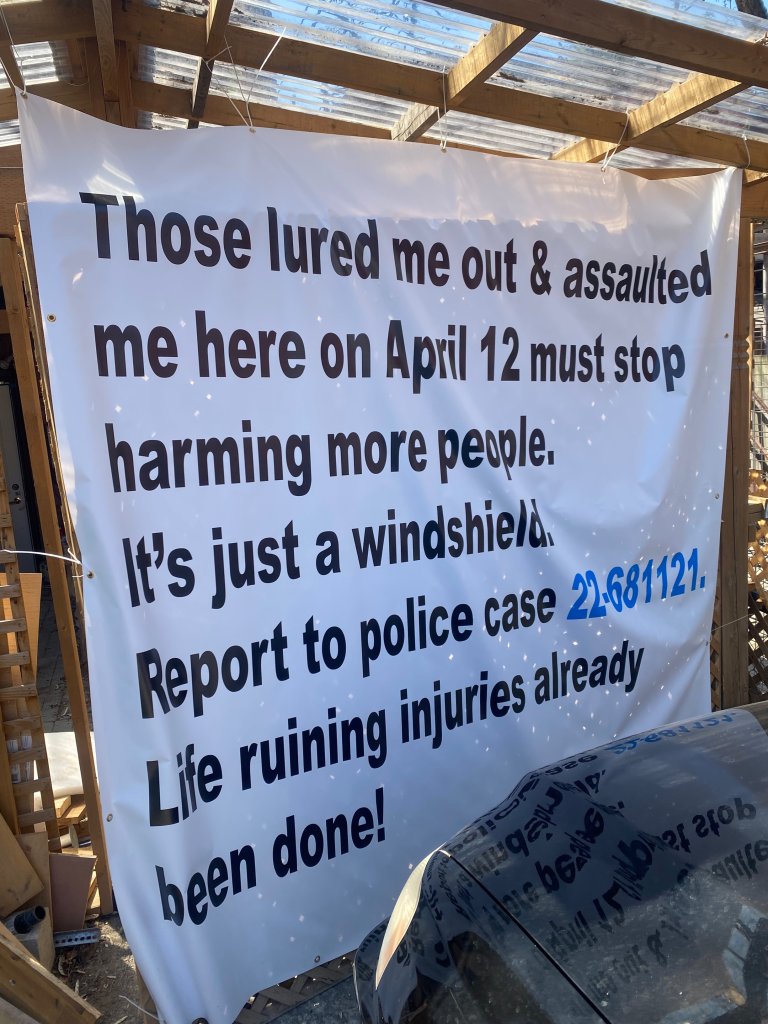 When asked about the signs, Chan said: “I don’t want them to hurt more people.”

“I’m not the one who (smashed the windshield),” he said. “Having gone through what I’ve gone through is really not worth the effort. So I don’t want them to repeat the same mistake again.”

Chan recently started a GoFundMe in an attempt to stay afloat as his injuries have hindered his ability to work.

He is appealing for help to “help Crimson Teas come back by August 2022.”

In the post, Chan said he was “brutally assaulted like a pest, a cockroach in bright sun light, because of a piece of windshield.”

In the post, Chan said he was prepared to walk away from the shop, after the alleged assault.

He said he is seeking funds to help pay for medical treatment, a new pair of glasses to replace the ones broken during the incident and to help cover rent and property tax for May, June and July.

“Amazingly, my customers and community partners reached out to me,” he wrote. “They encouraged me to recover, come back, and carry on Crimson Teas as a survivor of violence in the community.”

He said he now wants to deliver a message of “not giving in to violence.”

“With your support, we would want to transform this incident into something meaningful to the community,” he wrote.

By Friday afternoon, the fund had already raised over $63,000.