Hundreds of wildfires across Canada have forced evacuations and torched homes in the wake of record-breaking temperatures in the western part of the country this year.

While it is normal for Canada, which has nine per cent of the world’s forests, to experience wildfires during the summer months, this year’s season has come early and the intensity and overall numbers are higher.

As of July 14, there were some 226 uncontrolled actives fires burning in different provinces, according to data from the Canadian Interagency Forest Fire Centre (CIFFC).

The country is at national preparedness level 5, with British Columbia and Ontario requiring full commitment of resources, followed by Alberta, Saskatchewan, Manitoba at level 4.

The situation is particularly dire in B.C. where a provincial state of emergency was declared on July 20. 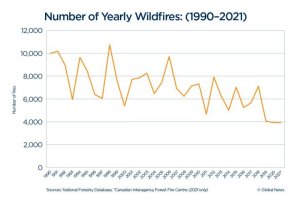 John McKearney, fire chief of Whistler, B.C., and president of the Canadian Association of Fire Chiefs (CAFC), said the severity and the size of wildfires were “really striking.”

“We’re only in the middle of July and we’ve already surpassed what we would have the whole wildfire season, so it’s quite daunting right now,” he told Global News.

“Nationally, this has been a concern for a number of years now.”

Climate change, extreme heat, prolonged drought amid a lack of rainfall, and an increased build-up of communities are major contributing factors, experts say.

We take a look at some yearly trends and historical data:

While the current wildfires are raising concern, with Environment Canada sending out special air quality advisories in each province, they are not the worst on record.

Annually over the last 25 years, about 7,300 forest fires have occurred on average, according to Natural Resources Canada. The total area burned varies widely each year but averages about 2.5 million hectares annually — which is nearly half the size of Nova Scotia.

National historical data over the last four decades shows that 1989 was a peak year for wildfires. In that year, there were roughly 12,000 wildfires and an estimated 7.5 million hectares of area was burned, according to the National Foresty Database (NFD). 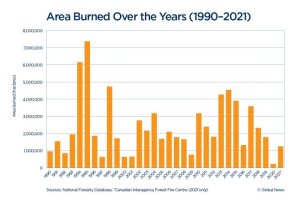 Since 2017, there had been a steady decline in area burned, but that trend has now been reversed.

However, the biggest change over time — not shown by these charts — has been the impact on people and property, said David Martell, a professor at the University of Toronto’s Institute of Forestry and Conservation.

“There are more communities being threatened in recent years than there have been, say, 10 and 20 years ago,” Martell said. 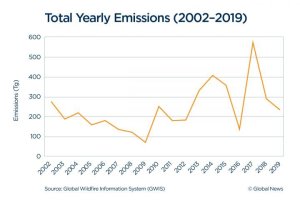 Wildfires in Canada burn in two major areas: southern B.C. and the boreal forest extending from Alaska all the way to Newfoundland and Labrador.

Over the years, the dry climate, thick forests and type of vegetation in these areas has made them particularly susceptible to wildfires, Martell explained.

“When you get a combination of coniferous forest and dried-out forest, then you get the potential for fire,” he said.

Read more:
How will Canada prepare for more heat waves and other extreme weather events?

However this year, McKearney said a number of fires have also erupted in locations that hadn’t previously seen them. These include the resort municipality of Sun Peaks and Whitecroft in B.C.

Christopher Rodell, a PhD student in atmospheric sciences at the University of British Columbia (UBC), said the provinces of Saskatchewan and Manitoba are also very active this year.

Fire Danger is a relative index of how easy it is to ignite vegetation, how difficult a fire may be to control, and how much damage a fire may do.

The wildfire season in Canada typically starts in April, hits its peak in July and ends in October. But more recently there seems to be a shift in the timelines, researchers have noticed.

Read more:
Western Canada’s extreme heat wave: Some experts have ‘never seen’ anything like it

In B.C., for instance, Rodell said that the wildfire season started earlier than usual this year because of the unprecedented heat wave.

“We don’t typically have that many fires in June. They’re usually a bit later in the season,” he said, adding that the wildfires in B.C. peak in August.

Johnston agreed, saying, “It’s very early in the season to be seeing so much fire activity” in B.C.

Based on their studies, Martell said he and his colleagues have also noticed the wildfire seasons gradually getting longer in both Ontario and Alberta.